Today at work we played dress-ups. No Seriously, this isn’t a bad joke, or some bad creepy game, we actually did.

Today at work we played dress-ups. No Seriously, this isn’t a bad joke, or some bad creepy game, we actually did.

While it wasn’t the kind of dress-ups you might have expected, it did have a serious note attached to it.

The business I work for has gotten behind the country and is supporting the Relief cause to aid with the ongoing Drought our country is experiencing.

Our Workplace decided to go one further with this and raise some additional donations from within our team and our local community.

This is where the dress-ups came into it, since the cause was for drought relief for our farmers, the team decided to dress up in ‘country’ style. 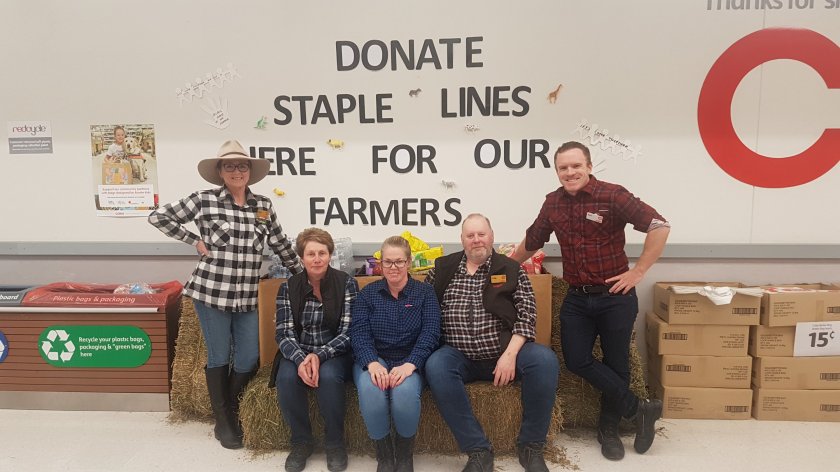 While there was a lot more of us, not everyone is happy to be on camera.

The team may be camera shy, but they did raise over $600 between them, and are pretty good at convincing our customers to do the same.

OK, so it wasn’t really dress-ups, in fact I’d say a lot of my colleagues probably just raided their own wardrobes.

Parents! only you can relate, check out these hilarious memes from father-hood.co.uk

As I was doing some nightly reading to catch up on what every other Parenting Blog (and more) have been up to I came across this one that I felt the need to share with everyone.

Anyone who is connected to the various social pipes knows what a meme is and appreciates and values their humor.

While non-parents may still get a laugh out of this list,

Only parents will truly understand them.

Its Monday, which means its the start of a new week. It also means I am a day late with my weekly wrap up. 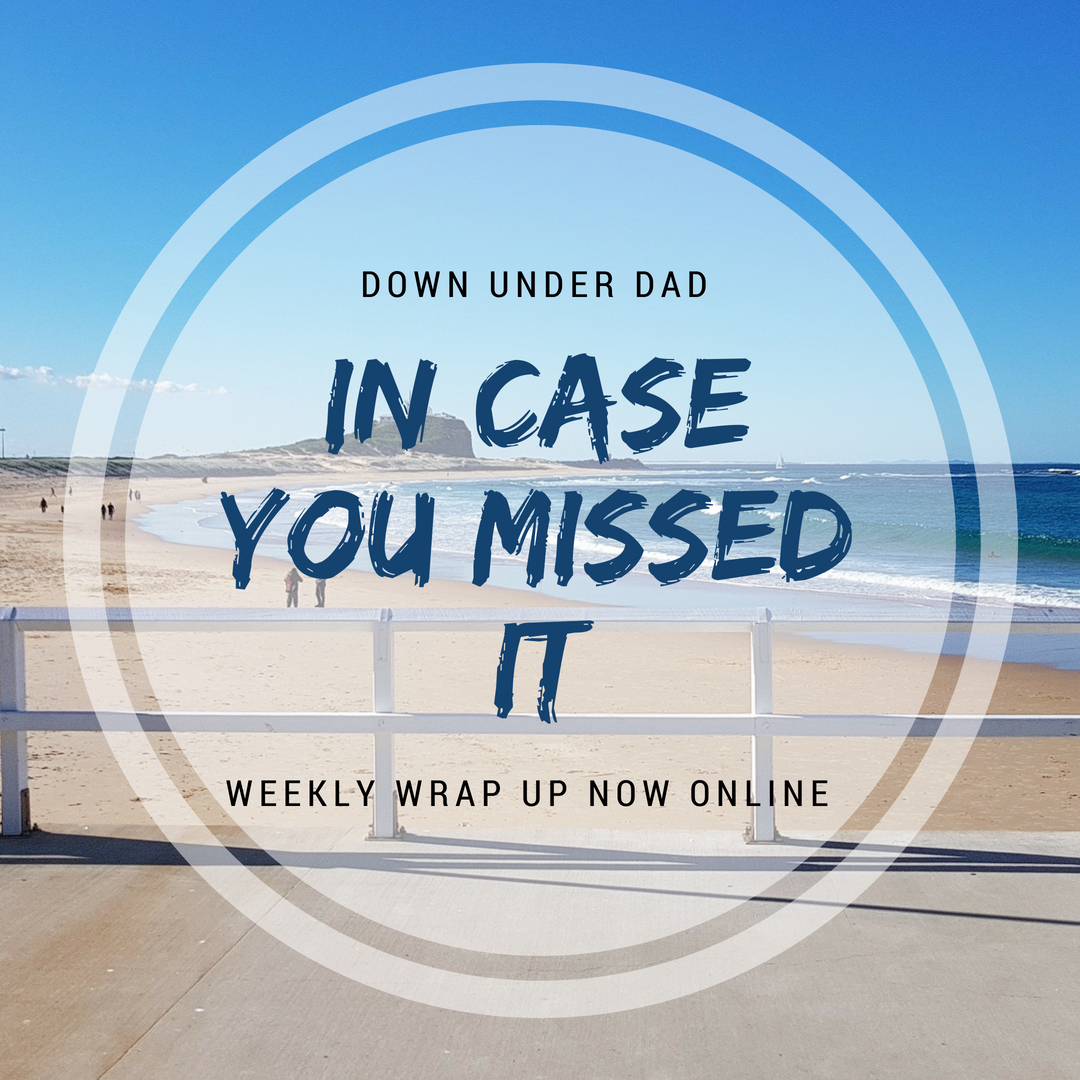 Its Monday, which means its the start of a new week. It also means I am a day late with my weekly wrap up.

and while I could give you any number of excuses why I am running late this week, I’ve said from the start I would be honest with you and I simply don’t know why.

The Down Under household had a fairly busy week last week which partly attributed to the missed timeline, but also my thoughts have been thinking outside of just daily posts to keep you updated and trying to think about the bigger picture, big things are coming.

But enough excuses, here it is, the week (and 1 day) that was.

Last weeks Top 10 was all about Twitter (way to many T’s I know), and the hilarious Dad’s that use it to share their real lives with the world. I say real lives as Twitter is where the truth comes out.

Just check out some of these Dad’s and you will know what I’m talking about.

Yes, my single friend with 0 children, I’m sure zip lining in Vegas is most exhilarating, but…

Have you ever had to speed wipe your butt because you just heard a loud crash in another room followed by your 5yo screaming for help and your twin toddlers crying hysterically?

The Week So Far

Tuesday the whole family was overtired, thanks a lot Toddler Sleep Regressions

Wednesday started off as usual with our weekly Swimming Lessons and ended up with a hostage situation that lasted a horrific 15 minutes. 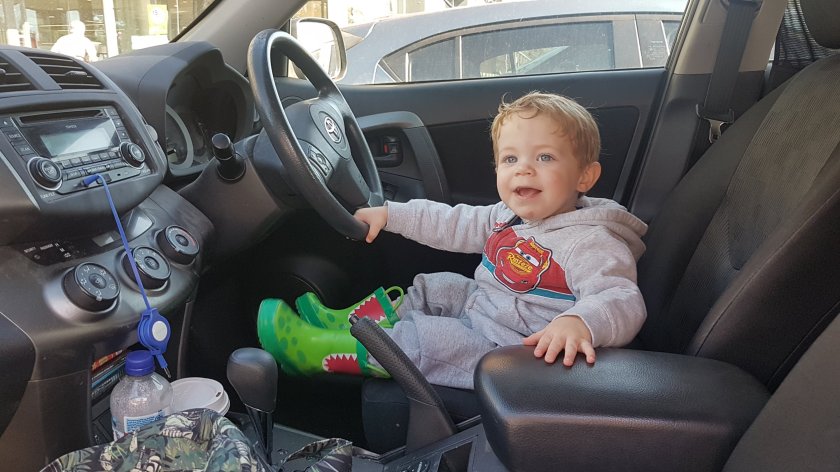 Friday’s first stop was the tax man, a boring affair by all accounts, but a well behaved toddler meant it was followed up by a fancy breakfast.

You can read all about it here The Week So Far. . .

If you actually read it you would also know that Mr and Mrs Down Under also had their first child free night in months on the weekend. Why is it that when you finally have the free time without children, all you want to do is relax and sleep.

If you haven’t realised yet this is a Dad Blog, and you can’t seriously have a Dad Blog without the Odd Dad Joke – or in this case, without regular Dad Jokes.

This particular Dad Joke is the perfect play on words, also a good example why you should think carefully about what you name your kids.

So that’s it for last week in terms of the blog. Obviously more happened in the week then I posted about. However balancing a full time job with being a Dad means sometimes there isn’t always time to let the world know about every little happening. If you would like to keep up to date though I’d suggest a quick follow on Twitter @DownUnderDadbg or on Instagram @downunderdadblog

Been away for awhile, check out my previous weekly wrap up here Weekly Wrap Up – Sunday 29th July 2018

Its Friday! in this part of the world anyway, which means the weekend is here. Down Under Dad actually has this weekend off work so more time outside, more time for adventures, and more time with the family.

Its Friday! in this part of the world anyway, which means the weekend is here. Down Under Dad actually has this weekend off work so more time outside, more time for adventures, and more time with the family.

How has your week been? Considering the weather has still been unseasonably warm, the week has been relatively straight forward in the Down Under Household.

So while nothing overly exciting happened on Tuesday, you will understand why I brought it up in a minute.

Tuesday is daycare day for Oliver. From the reports we get back from the centre, some days it feels like he has more fun there then he does at home.

Normally on a Tuesday Mrs Down Under would go to work, with Down Under Dad not starting work til later in the day, it would fall to me to get the little guy up and ready for Daycare whenever he woke up.

This Tuesday however Down Under Dad had been asked to work during the day rather then the afternoon like usual. Normally this is a good thing, and this week was no different. However it did mean that the morning routine which usually doesn’t have a time limit, was rushed.

Now I won’t bore you with the details, but of course a 2 year old doesn’t really understand when there is a sense of urgency about getting ready. It also happened to be a morning after a night of interrupted sleep (see Toddler Sleep Regressions). This meant that not only were Mr and Mrs Down Under Dad tired, but so was the little guy.

How does the morning routine go in your household? Is it always organised chaos? or have you got it down to a fine art? I’m keen to hear your tips.

The swimming lessons happen the same time every week throughout the year except for during school holidays. That means that we are 2 weeks into this term of lessons. It also means that not only did we have a 2 week break before this, but due to A Week with a Sick Toddler , we actually had 4 weeks off.

For most people 4 weeks off wouldn’t be an issue, unfortunately when you are dealing with a toddler, 4 weeks off can seem a lifetime.

To summarise, swimming lessons aren’t exactly going swimmingly (#dadjoke) at the moment, fingers crossed another week and they will be back to the usual fun.

After swimming we needed to duck into the supermarket for some urgent supplies (literally wearing the last nappy we had), unfortunately getting back into the car with groceries in one arm and a toddler in the other proved difficult. If you follow me on Instagram @downunderdadblog you already know how this goes.

Our 2 year old’s fascination with cars has reached the next level, now he feels the need to pretend to drive the real ones. Oliver managed to climb into the drivers seat before Down Under Dad had a chance to strap him in and wouldn’t budge. What followed was a long ordeal (15 minutes or so) of Dad sitting in the passenger seat while the little guy pretended to drive.

While there is a smile on his face, every time I asked him to hop in the back I was politely told No No No!

Thankfully the hostage situation ended peacefully with the subject restrained.

This morning we had arranged for our tax returns to be completed. Again I won’t bore you with the details, but the little guy was surprisingly well behaved.

As we had left home in a hurry, we decided to eat out for breakfast. If you have read about Our Quick Escape – Part 1 then you would know we really enjoy eating fancy for breakfast.

The venue we decided on was Table 1 Espresso , we had been before but when the little guy was much younger. The difference now was we needed 3 meals between us not 2.

As before the service was great, as was the food. 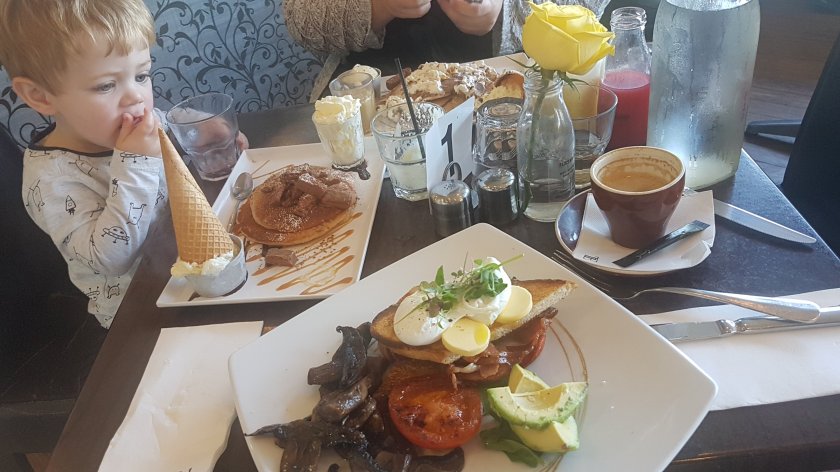 As you can see breakfast consisted of Bacon and Eggs etc for Dad, and pancakes for Mum and Oliver.

The thing about eating at a restaurant with a toddler is that you never know just how much you are going to eat. If you don’t order them their own meal, then they will proceed to eat all of yours. If you do, chances are even if its a ‘kids’ serving, it will be too much.

Today proved to be a combination of the two.

A combination of the two in more ways then one, in the picture above you can see the little guy’s excitement at mixing his ice-cream with Mum’s juice.

All in all everyone enjoyed their meal, the little guy didn’t eat much but his meal was finished off by Dad without hesitation.

As its Friday today, that means the weekend is tomorrow. What have you got planned? Mr and Mrs Down Under Dad are having a child free night, which means its finally time for another Date Night .

A woman has twins and gives them up for adoption.

Years later, Juan sends a picture of himself to his birth mother. Upon receiving the picture, she tells her husband that she wishes she also had a picture of Amal.

For more Dad Jokes check out Dad Jokes of the Day